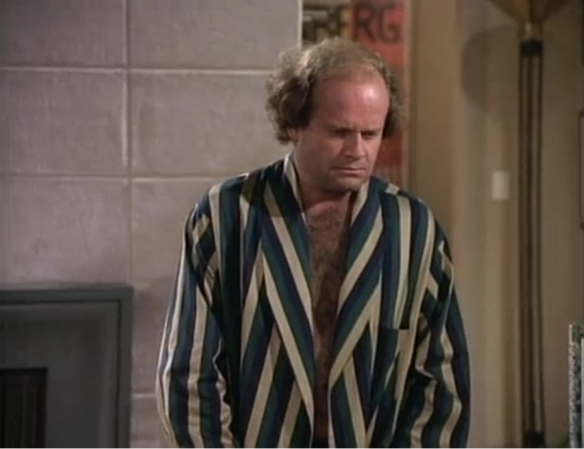 Opening thoughts: This is when Frasier episodes started being presented with cutesy and/or trite titles that separate the three acts. Last week, when I reviewed the pilot, I separated the episode into three acts according to what fit on 3 hand-written pages. Moving forward, I will simply separate the acts as prompted by these titles.

While writing this review, I wondered whether it might pay to count the number of times that Frasier acted like a cartoon version of a whiney sociopath. I decided that the “# of times Frasier or Niles (both psychiatrists) exhibit mentally ill tendencies” series-count category will suffice. In fact, rather than “A series synopsis about the story of Niles and Daphne,” the Frasier Denied elevator pitch might work better as “An examination of a Seattle psychiatrist’s many clinical mental disorders.”

To my and your delight alike, I’m starting to find that this show seems particularly absurd when you consume it in the form of a written summary. In fact, it kind of makes you wonder how Frasier can possibly seem quite so normal when you’re just watching it. To demonstrate what I mean, I will lead us in skipping to the last line of this episode’s review before we begin:

Martin sends Frasier to the store for beer.

Our episode synopsis:
Act 1: Dear God, It Wasn’t A Dream

A robed Frasier emerges from his bedroom. Daphne is cleaning. She tells him that she has already taken Martin to an appointment. Frasier, exhibiting dementia, asks who she is; she reminds him that she moved in the day before.

Frasier goes to the kitchen, where Martin is cooking breakfast. Frasier takes a drink of coffee, complains that it isn’t the coffee he likes and dumps it in the sink. Martin explains that it is the right coffee, but Daphne has added egg shell and allspice. He puts a plate of bacon and eggs on the table for Frasier, who complains about how unhealthy it is by giving not one, but two detailed descriptions of how such food causes hardening of the arteries and cardiac arrest.

Frasier opens the front door for the newspaper, but it isn’t there. He begins shouting accusations at a neighbor, and Daphne talks him down by revealing that she has already picked up the paper. Then, Frasier is upset that it has already been read. Exhibiting clinical anxiety, he makes a speech about how he is not a morning person,explaining that in order to function every morning he requires a crisp, new paper to read, a muffin and yogurt for breakfast, and coffee without egg shells. Further, he claims that violations of these requirements cause his radio show to suffer, hence spreading misery in the lives of all the listeners who depend on him.

Daphne says that it will take time for everybody to adjust, but it will all turn out fine. Frasier sits down at the table again, alone. Eddie runs over and sits across from him. Frasier shouts at the dog and, exhibiting OCD, complains to Martin that he can’t read the paper with Eddie staring. Frasier leaves the table. Eddie, of course, follows him.

Cut to the KACL studio. Frasier is on the air. He reviews the daily topic as ‘Intrusion.’ A caller (voice-over by Christopher Reeve) explains he has agoraphobia; Frasier insists that the caller stick to the topic of the day. Off the air, Frasier intends to stay in the studio for a while so that he can read his book in solitude and quiet. Enter Bulldog, who needs to use Frasier’s studio for the immediate episode of his sports show, so Frasier has to leave.

After Roz illustrates a close relationship with her mother by sharing intimate specifics of her romantic pursuits over the phone, Roz and Frasier talk about his parents. He explains that he and Niles resemble their mother and neither of them shares anything with Martin.

Act 2: The Best Laid Plans
Frasier returns home to an empty apartment. He is thrilled at the chance to quietly read his book. He pours some wine and sits on the couch. Immediately, Daphne, Martin and Eddie return. Daphne offers Frasier some tea; he refuses. As Frasier tries to read, Martin pesters him to describe the book. Frasier yells angrily that he can never manage to spend any time in quiet. Martin offers the exposition that most of a week has passed since the beginning of the episode, during which Frasier has been just as volatile.

Cut to Café Nervosa. Frasier is reading. To his irritation, Niles enters. He orders a café latte and ruins the end of Frasier’s book for him. Frasier laments that living with Martin is destroying their chance to have any sort of relationship, since they are always in each other’s way. He says that he wishes he had gotten an apartment for Martin and Daphne.

Niles encourages Frasier to try his best and give it time (our second double-cliché this review— it might become a regular feature). In print, this sounds like the perfect time for a tender pause, but there wasn’t one. Frasier agrees with Niles and thanks him for being so helpful. He also compliments Niles’ work as a psychiatrist; Niles pointedly revels in omitting reprisal.

Act 3: A Couple of White Guys Sittin’ ‘Round Talkin’
(Please remember that it was the show’s producers who came up with the titles.)

Frasier returns home. Daphne is readying much of the furniture from the guest room (formerly Frasier’s study) to be brought down to storage.

Because Martin intends to watch a television show starting in 3 minutes, Frasier starts an egg timer at that amount of time so that they can have a conversation.

Frasier reveals that he’d been briefly suicidal 6 months prior when he and Lilith were beginning to split (which— though it counts as clinical depression— we won’t count, since it’s only exposition, specifically outside the timeframe of the show). He says that thinking of Frederick had kept him from jumping. Martin tells Frasier a story of his own, but it isn’t genuine or profound enough for Frasier, so, exhibiting Borderline personality disorder, he starts yelling and it escalates rapidly.

The timer goes off. Frasier starts to say that Martin should move out; Martin finishes his thought, somehow also understanding the motivation behind it— that they were not getting the chance to have a relationship. He explains that bonding happens not in 2 days, but “more like 2 years.”

There is a tender pause as they register facial expressions that indicate that they agree.

Martin sends Frasier to the store for beer.

Credits vignette: One Man’s Storage Room Is Another Man’s Sanctuary
I’m pretty sure it’s fairly unusual for the credits vignette to have a title, but anyway: In the basement storage room, Frasier sits in his leather chair with a glass of wine, reading.

Closing thoughts: The synopsis of the pilot was about 50% longer than this one. I suspect this may be due to this episode’s heavy verbal elaboration of what were somewhat repetitive problems, whereas the pilot had more exposition to get through, especially in introducing the characters, format, and story.

Martin is developing a little bit beyond the grumpy guy in the jive-ass green recliner chair, and he actually takes the high road for the majority of the episode (of course, Frasier leaves lots of room for that comparison). Martin is probably my favorite character on the show. It’s easy to picture the ‘unrefined old guy’ played with less nuance, and John Mahoney delivers a delicate, minor measure of charm, like straight vodka with a dash of ground cinnamon. Yeah. That’ll actually be my description of Martin Crane.

In a later episode, when he defends his favorite restaurant against Niles’ and Frasier’s sarcastic taunts by simply saying “I like this place,” you can feel a sort of rise rooted in a moral fulcrum with a formidable weight on his side which has by that point been established and progressively augmented with a masterful subtlety, little by little, right from the outset— a slight, generous rise of inflection here, a mournful downturn of the brow there. He’s stubborn but charitable— stoic but sharp.

This episode saw a couple of organic changes to our format. First, the act titles on the show. I think starting with next week, I will provide a brief (probably one word) assessment of each of those. Secondly, we introduced double-clichés in the exposition as I describe it. This is amusing to me because I was the one who wrote it. I think I’ll call attention to those moving forward as well. Just consider it my revenge for the act titles.

Conflicts that occur simply because someone behaves in a very unrealistic way—most often by not explaining something mundane:
At this early stage, the show still hasn’t fully developed its brand of sitcom-surreal faux-conflict, but we are already experiencing a less developed form of it consistently. In this, the series’ second episode, both Frasier’s inability to find a place to read and the mild psychotic episodes which result suit us perfectly under this heading.

Continuity errors or anachronism:
(none)

“Kind of a great TV moment” moments:
(none)

TV Guide version (© Netflix): “Frasier is on a quest for solitude, but can’t find it.”